The demise of the Soviet Union ushered a golden age of globalisation. Since 1989, global trade and production more than quadrupled. Poverty was beaten back. Science and technology progressed faster than ever before. But when we look back at those thirty years, we cannot resist asking the question where the current surge of authoritarianism, nationalism, and conflict has come from?

Despite science and its revelations, the world remained very slow in doing something with those insights, about environmental degradation, for instance, about the tilt of capitalism towards speculation, the neglect of public infrastructure and civic education. Hence, knowledge does not always lead to good leadership and the readiness to change.

Moreover, while globalisation came with the promise of more democracy and respect for human rights, Western consumerism and diplomatic opportunism empowered authoritarian countries instead of fragile democracies. The main achievement of thirty years of liberal pretence, is that it made dictatorship strong.

This book offers a bird’s view of the last thirty years of world politics. It does not limit itself to a single explanation and a single miracle solution, but tries to explain how different elements enforced each other: consumerism, the resentment and ambition of authoritarian powers, reckless interventionism, the erosion of civic education in the West, the surge of disinformation campaigns, the neglect of the South and its short-lived commodity boom, mass-migration, the rise of superficial patriotism, and so forth. The reader discovers eight themes that run like threads through the book:

1) Harmony contested: While the West celebrated the new world order, others plotted to contest it from the start.

2) A power shift from West to East, with the China, Russia, and the Gulf States as main victors.

4) The decadence trap: the West taking its prosperity for granted and refusing to act upon many different warnings. The cowardice of the moderate politicians and the the rise of shallow patriotism.

5) Hubris: Assertive yet inconsistent liberalist interventionism. 6) The school of strife: Western military campaigns and economic power politics as a source of inspiration for competitors .

7) The changing nature of power: more growth and technology, limited benefits for many people.

8) Limit of learning: an age of information was not necessarily and age of Enlightenment 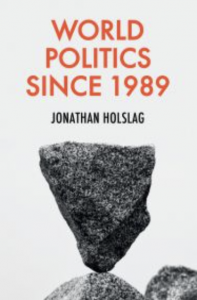 “This is a comprehensive work, with solid arguments, detailed research and policy proposals which I consider to be important and timely. Students, and others, will benefit from reading it.” James Appathurai, Assistant Secretary General for Political Affairs and Security Policy, NATO.

“A tour de force. This is the most comprehensive and insightful I read in the last ten years. It is a text no one seeking to study these developments can afford to skip. It speaks volumes to academics, policy makers, as well as to citizens who are about public affairs.” Amitai Etzioni, George Washington University.

“A balanced and most interesting work.”  He Baogang, Peking University.

“This survey is rich and comprehensive, and more importantly, conveys a sense of discovery, personal reflection, and hope for the future.” K.C. Lin, Cambridge University.

“It is a brilliant book. The analysis is fair, intellectually courageous, and sometimes an eye opener for me. This tour d’horizon is a masterpiece.” Sergei Karaganov, Russian Council on Foreign and Defense Policy.

“A powerful and daring account of the last thirty years of world history, chronicling the failure of Western leadership, of neo-liberalism, of neo-imperial hubris, of the betrayal of the Global South and the inexorable rise of China as a superpower. A must-read for all those seeking explanations of our contemporary predicament.” Robert Gildea, University of Oxford

“This wonderfully written book takes the reader on a fascinating journey through the complexity of the last three decades of world politics. Jonathan Holslag connects the dots of a fragmented and scattered global landscape, offering multiple roads to understanding.” Federica Mogherini, Rector of the College of Europe, Former European High Representative for Foreign Affairs

3. The new order seen from elsewhere

9. Globalization and the return of power politics

10. What the hell happened?