BRUSSELS – Whether or not Vladimir Putin moves his troops into Ukraine, he has once again confronted Europe with a most painful reality: while being too weak to defend itself, it can no longer rely on the United States to come to its rescue. We are facing a reality in which Russia, despite its economy being only as large as Italy’s, can bully and intimidate a continent thanks to its energy reserves and its readiness to project vast military power.

Sure, an invasion of Ukraine would cost Russia a fortune and likely evolve into a grinding war of attrition. Invasion will unlikely be president Putin’s preferred option. Yet, the West should not assume war to be only costly for Russia. If Russia invades Ukraine, the impact on Europe will be equally devastating.

It will force gas-addicted European countries to find expensive alternatives and to severe billions in infrastructure, from pipelines, over pumping stations, to dedicated storage facilities. Russia also remains a key export destination and a supplier of resources like titanium. While the Kremlin has long prepared a gradual decoupling from Europe, especially in finance, the opposite remains unthinkable for most Europeans.

Russians, polls by Levada show, are not keen on a war with Ukraine. Yet, the overall aversion to the US, NATO, and the EU is huge. Russians, other polls show, are also much more prepared to fight for their country when it is threatened. One can thus imagine a situation in which president Putin blames the US for the eventual failure of the ongoing negotiations and claims that Russia must defend itself against alleged Western aggression.

Hence, if the Kremlin would most likely be able to overcome the country’s current reluctance to go to war, many European countries will find it much harder to accept soldiers to die for Ukraine, for many nothing more than a strange, peripheral country. Countless times, I have heard very senior European business leaders sympathise with the leadership of Mr. Putin, to the point that one got the impression that they were more attracted to Russian strong leadership than Western liberalism.

Let’s also be fair. If, at this stage, European countries would have to stand up to a large Russian land invasion, many soldiers would end up as cannon fodder. Western European land forces have decayed into a bulky peace corps, their wheeled armoured vehicles hardly suitable for combat in muddy battlefields in Eastern Europe, their fire power no match for Russia’s, and their command and communication infrastructure highly vulnerable to Russia’s immense electronic warfighting capabilities.

Chasing poorly equipped terrorists is one thing; facing a formidable conventional army, ready for sacrifice yet another. Many European land forces struggle with a predator complex from the Global War on Terror. They are used to being superior, at least in terms of technology and fire power, and have huge difficulties imagining that the hunter of the last decade might become the hunted in a large-scale conflict. 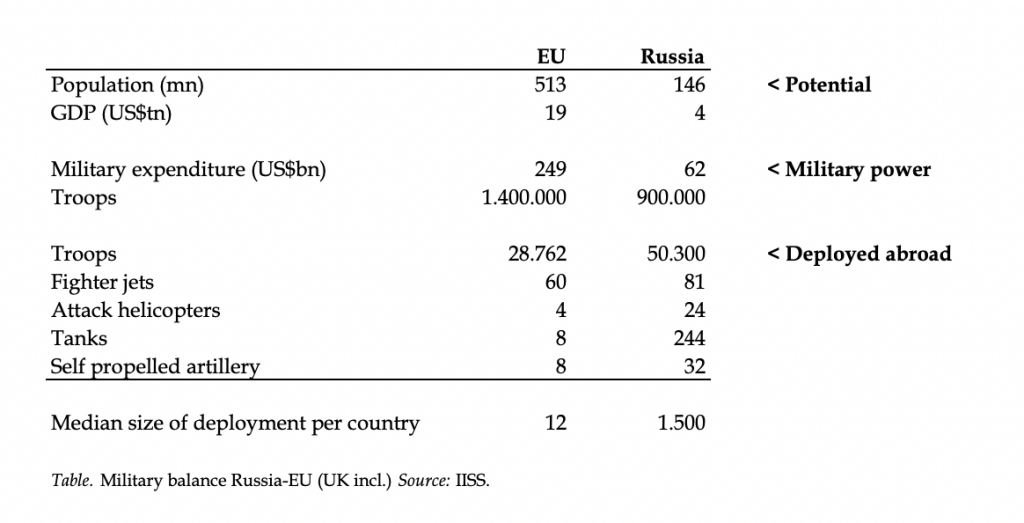 The whole European strategic mindset in that regard has become skewed towards defense; tactics towards limited surgical offense, often even from a distance. Standoff, it is called. Land powers like Russia have also trained in precision and long-range strikes, yet always combined with blunt power: wearing volleys of missiles and artillery and big division-size units moving in. If everything in Europe is about efficiency; armed forces like Russia still factor in sacrifice, redundancy, and attrition. Clean wars do not exist in the Russian military lexicon.

Europe has a lack of everything. Even if it would try to steer clear of frontline involvement, supporting from behind will not be evident either. Special forces, a crucial asset, are stuck in Africa and struggle to enlist enough quality recruits. Many countries lack standoff missiles or their stockpiles are dangerously low. Advanced fighter jets, capable of penetrating Russia’s air defenses, remain rare. Most navies have no capacity for long-range strikes and are not prepared to counter the kind of advanced anti-ship missiles that Russia has on its shorelines.

Moreover, while Russia has moved to a quasi-war footing and has 100,000 fully armed soldiers camping near the eventual battle field; most of European armed forces are slowly awaking from Christmas holidays and still struggling with the fall-out of Covid. Countless times, Russian military exercises have demonstrated its ability to mobilize tens of thousands of soldiers. The largest Nato manoeuvres mobilize around 10,000 troops at most. Operationally and mentally, Europeans are not ready for war. They will be craving for peace and that’s a major advantage for Moscow.

Europe must not count too much on the United States either. The United States are slowly restocking their arsenals, with new long-range precise ammunitions, but will prefer to send them to the Pacific. It preserves a sizeable conventional deterrence in Europe, including 70,000 troops, hundreds of prepositioned armoured vehicles and dozens of fighter jets. Yet, this is not sufficient to counter a Russian invasion in a country like Ukraine and Washington just cannot afford a war with Russia now that China becomes so powerful.

We can endlessly reflect on what drives Russia in amassing its vast military presence on Ukraine’s border, on how we came to this point, the misgivings and frustrations on both sides. Recent history has been complex on both sides. Is president Putin considering militarism and even war an opportunity to strengthen national unity? Is he genuinely concerned that Western support might cause Russian defeat in Eastern Ukraine? Or, is this the ultimate smokescreen to prepare a détente with the West without looking weak?

We can only speculate. What is clear, however, is that we enter a new tournament of great power politics and that Europe arrives at the start not as a strong, unified team, but as throng of plump puerile pygmies. The current impotence is unacceptable for a region that is five times richer, spends four times more on its military, has half a million more soldiers. Europe can mock at Russia’s dysfunctional governance and its economic sclerosis, but when it gets serious in world politics, Europe remains humiliatingly dysfunctional itself.

Even without war, Russia has defeated the rest of Europe already.